Welcome to Crude Blessings.
The Story of Glen Patterson

Much more than one son’s homage to his dad, Crude Blessings is a compelling narrative about a family patriarch who embodied the best qualities of the Greatest Generation, which inspired and powered the success of America.

Timely because of the increasing polarization in our country, Glenn Patterson’s story and values were rooted in the Christian ethos of decency, integrity, faith, and trust throughout his life in his business and family. His mantra,“Always do the right thing”turned out to be an enviable formula for success in a highly volatile industry.

His son Roe’s firsthand account of Glenn’s life is a memorable story about surviving adversity through positive, thoughtful leadership and determination. It is a great tutorial for how to achieve the American dream and how to treat others.

“A career in the oil field and the challenges of a crippling disorder are a proven path to an unbreakable relationship with our Lord. This is certainly true in the life of Glenn Patterson. The remarkable, significant, and successful life of this humble and good man is cheered in the pews of Calvary Baptist Church, to drilling rig floors across America, onto the gates of Heaven where he will find his dad, Monroe, waiting for him.”
—Don Evans, 34th U.S. Secretary of Commerce and Energy Industry Pioneer

“Glenn Patterson personified the character of the hardworking, entrepreneurial American oil field worker of generations past. He helped fuel the West Texas oil field ‘boom’ times of the early 1980s and survived
the ‘bust’ times of the late 1980s and early 1990s by finding value where others couldn’t. He accomplished this while never sacrificing his principles and always living by the Texas tradition of ‘A handshake deal is a deal.’ What a great life story!”
—Marshall Adkins, Managing Director of Energy Research for Raymond James

“The first time I shook Glenn Patterson’s calloused hand and saw the ‘clean enough to eat off of’ Patterson engine shop floor, I knew I wanted to recommend Glenn and Cloyce Talbott’s company. This book chronicles
how Glenn became the man he was—and how God pursued him and worked in his life right up until the last day.”
—W. Neal McAtee, CFA, Portfolio Manager, Reliant Investment Management, LLC,
Former Wall Street Analyst

“Crude Blessings is the impassioned and riveting history of a true American oilman. The story is brilliantly told with its remarkable cast of larger-than-life characters. Personally, it was a pleasure to work with Glenn, Cloyce, and PTEN over the years. I was lucky enough to do business with those I called friends.”
—W. Brett Smith, President, Rubicon Oil & Gas, LLC

“There seems no greater legacy that a father can leave his son than the deep-rooted values he instills by his own example of a life well lived. Glenn Patterson’s work ethic, fortitude, and ingenuity brought him
tremendous success in the oil business, while his integrity and fairness earned him widespread respect and admiration. His story is affectionately and candidly told by his devoted son, Roe Patterson, in Crude Blessings. The book is a tribute to his father, whose strength and resilience were put to the ultimate test when confronted by Alzheimer’s disease. Supported by the love of his family and friends, the man who mastered the oil fields courageously found his own avenue to peace, despite a prognosis he could not change. Crude Blessings should serve as an encouragement to others to join Patterson in sharing their stories and joining the fight to change the future of this disease for millions.”
—Theresa Hocker, Executive Director, Alzheimer’s Association–North Central Texas Chapter 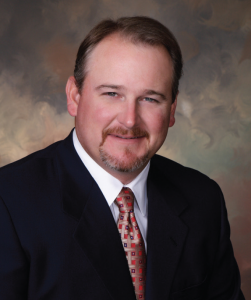 T. M. “ROE” PATTERSON
is a 23-year industry veteran in the oil and gas services
business. He was promoted to president and chief executive
officer of Basic Energy Services (Basic) in September 2013 and
was recognized as the Top Public Company CEO by the Fort
Worth Business Press for 2014. Prior to his recent appointment,
he served as the company’s senior vice president and chief
operating officer from 2011 to 2013. Patterson began his
tenure at Basic in 2006 and has held multiple positions in
executive leadership since joining the company.
Patterson’s roots are grounded in the oil and gas business.
He grew up working for his father in the family’s business,
Patterson Drilling Company. After earning a Bachelor of Science
degree from Texas Tech University, Patterson joined West
Texas Caterpillar for a year before rejoining Patterson Drilling
Company as a contract/sales manager for its Permian Basin
Division. After four years he left Patterson to form his own
manufacturing and oil field service company, TMP Companies,
Inc., until he sold in late 2005 and joined Basic’s management
team in early 2006.
Roe and Tonya Patterson have two children and reside in
Fort Worth, where they are active in their local community.
Roe serves on the Tarrant County American Heart Association
Board, and he and Tonya were co-chairs of the AHA Heart Ball
in 2016. They were also honorary chairs of the 2017 North Texas
Alzheimer’s Association Memory Gala in Fort Worth. In his free
time, Roe is a business speaker. His speaking engagements
have taken him around the country, speaking on his own
personal business experiences and the practical approach to
leadership that his father embraced.